SCROLL DOWN for Highly-Human Jobs report ...

... with action options for immediate and future use.

New Magazine on Shifting to Jobs of Future NOW Millions of "Highly-Human" Jobs Can Be Found or Created Now! And Everyone Can Get Into the Act! 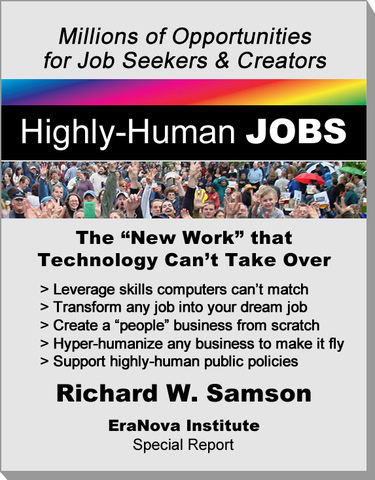 Get the special report that can get you going! Then join this site (free) to share and network until you get what you're after!

While employment hangs back, a whole new form of work is starting to break out. There are millions of opportunities RIGHT NOW for those who see the trend and follow simple steps.

"Highly-Human Jobs" by futurist Richard W. Samson is a breakthrough guide to --

Published by EraNova Institute, the special report includes tips and examples for honing the seven highly-human skills that set us apart from electronics. The report also describes the "highly-human economy,” poised to overtake the present service and tech economy, which earlier overtook the manufacturing economy, which in turn superseded the agricultural economy. The emerging highly-human economy will feature non-programmable forms of conscious aliveness that even AI systems can't match.

Are you a journalist, blogger, or broadcaster?
If you want to review the report, CLICK HERE to request a complimentary copy.

"The great thing is that we don't have to wait for anybody to create these jobs for us," says the author. "Anyone can find or create them right now on their own -- although business leaders, the next President and Congress can help.”

After ordering the report, be sure to sign up with this site. Then you may join online discussions about finding or creating highly-human work, shifting to highly-human business practices, and smoothing the way through legislation.

Richard W. Samson is Director of the EraNova Institute and has served as consultant to IBM, AT&T and other large organizations. He has created several websites and social networks including --

Samson was instrumental in creating the “3 in 4 Need More” campaign now run by the non-profit 3in4 Association (www.3in4needmore.com). This campaign works in conjunction with state and federal government as well as major insurance and healthcare companies.

Focusing on mental as well as physical improvement, he is the author of several books including "Mind Over Technology" and "The Mind Builder."

In 2005 he foresaw the current employment crisis and offered strategies for resolving it, in an article appearing in The Futurist magazine, “Hyperjobs: The New Higher-Level Work and How to Grow Into It.” His article “Riding the Life Extension Wave” was the cover story of the December, 2011, issue of National Underwriter Life & Health, the leading industry journal.

In 2005 he originated and popularized the terms “hyperjobs,” “hyper-human jobs,” and “hyper-human economy.” In 2012 he introduced “highly-human” as a more accessible term to describe the new work and economic system. He has also used the terms “meta” and “super” as synonyms for “hyper” and “highly.” He is the originator of the term “off-peopling” to describe the job-shifting trend that parallels offshoring. Richard W. Samson is also known as Dick Samson, especially on the Internet.

Are you a journalist, blogger, or broadcaster?
If you want to review the report, CLICK HERE to request a complimentary copy.

As a reader of the report and member of this site, you'll rub shoulders with others who will stick with you until you achieve what you're after.

A meeting place for pioneers of the highly-human economy, set to dwarf today's high-tech economy. (A service of EraNova Institute)

Bill Meador is now a member of Highly Human Jobs
Jul 26, 2019
Welcome Them!

In 2012, I wrote a reply to an article by Steven Kramer regarding Demographic Decline.  The scenario on which I am working proposes a decline in world population, beginning in 2100.  The problem I am…Continue

Dick,I apologize for asking two questions right away, but things just happened.The question is, How does Highly Human job creation apply to a business meeting where your reputation and ADVANCEMENT is…Continue

Creating Clients Instead of Jobs

Hello Dick,  Highly Human Jobs is a great book and highly recommend it.   I am a consultant and am quite secure in my job and my abilities.What recommendations do you have for helping others like me…Continue